Must-eat dishes in HCMC – Saigon/ Where to try?

If you are looking for some places to eat or try the fullest experience of traditional Vietnamese foods in Ho Chi Minh City, you may get overwhelmed by the suggested information and recommendation on the Internet. Here we have listed the top 10 most common dishes that can be found everywhere else in this multicultural city.

This is the iconic dish of Vietnam, which is served throughout the country and spreads to many western countries. Phở basically consist of soft rice noodle in a soup broth, along with either beef or chicken and a lot of herbs including sawtooth herb, mint, and Vietnamese coriander. There are two distinctive Pho cultures which could reflect much about each region. While the southern Vietnamese Pho is said to be sweeter and spicier, the northern Pho originally remains the authentic values and essences of Ha Noi. The Vietnamese mostly choose to indulge in some open-air stall extending out onto the sidewalks with squat tables for seating. They believe the best Pho does not only come from a restaurant, but even a small vendor on the street can deliver a flavorful experience. 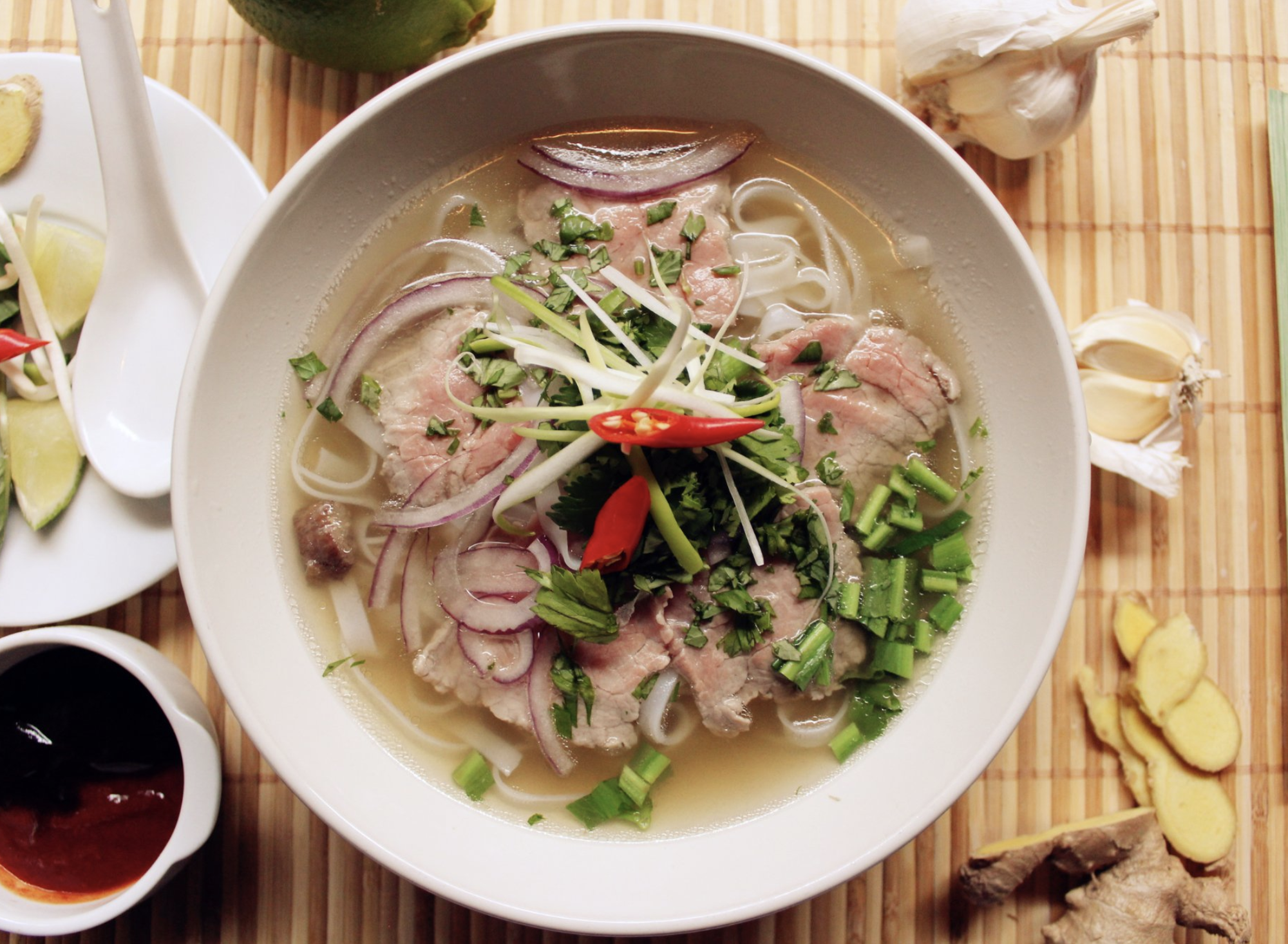 It is a traditional Vietnamese meat rice vermicelli soup. The dish has several varieties such as bún riêu, bún riêu cá, bún riêu ốc, which regularly depends on the ingredients. The broth is made from various freshwater paddy crabs (or snails, fish) added with the key ingredient, tomatoes that create a fresh sour flavour and nature sweet and tartness from the tomatoes. You can have a steaming hot bowl of bun rieu cua with the price of 45,000 ($,2,08). 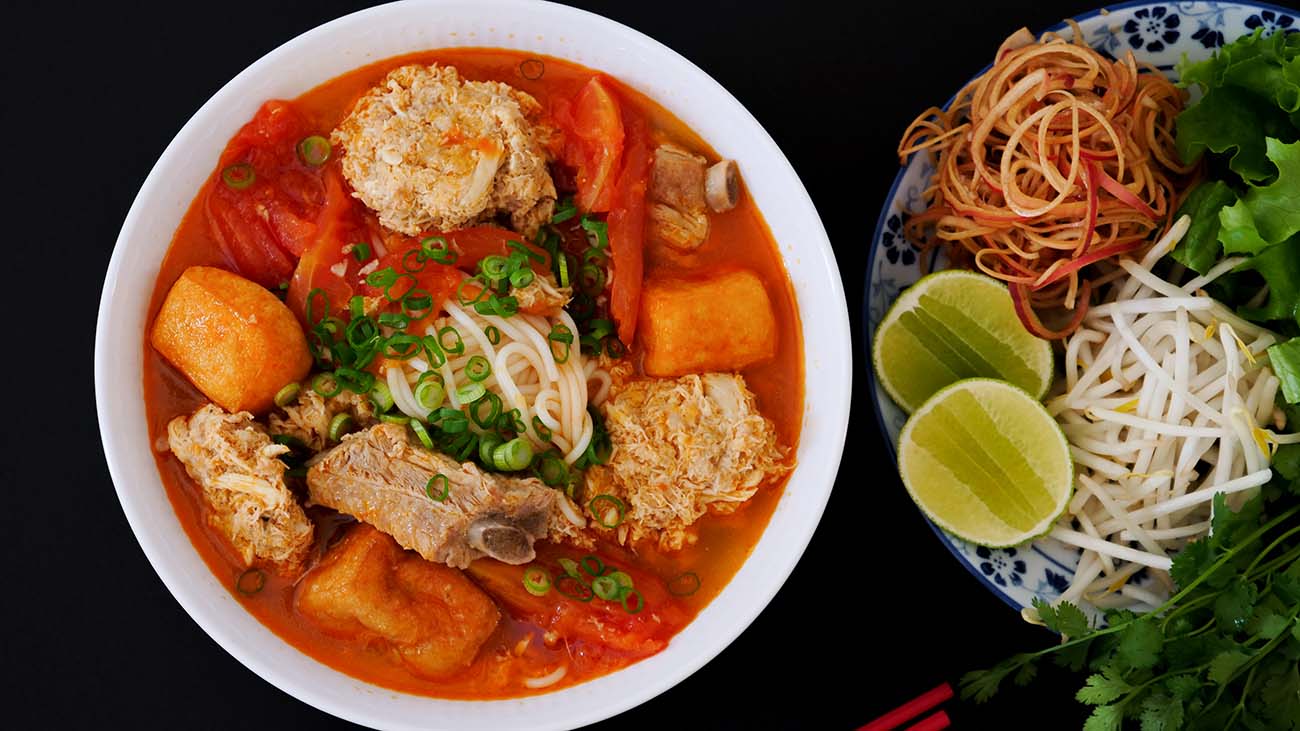 Bun mam is a southern Vietnamese dish, especially in Mekong Delta provinces. The broth has dark-coloured soup due to fermented fish, which also plays as a key factor making the flavour of the dish so special. Along with the broth, or rice vermicelli noodles, they put an assortment of meats like squid, prawns, and pork on top of the noodles. It may be a little too sweet or strong taste for the first-time experience, however, it is still a popular dish and worth to give a try. 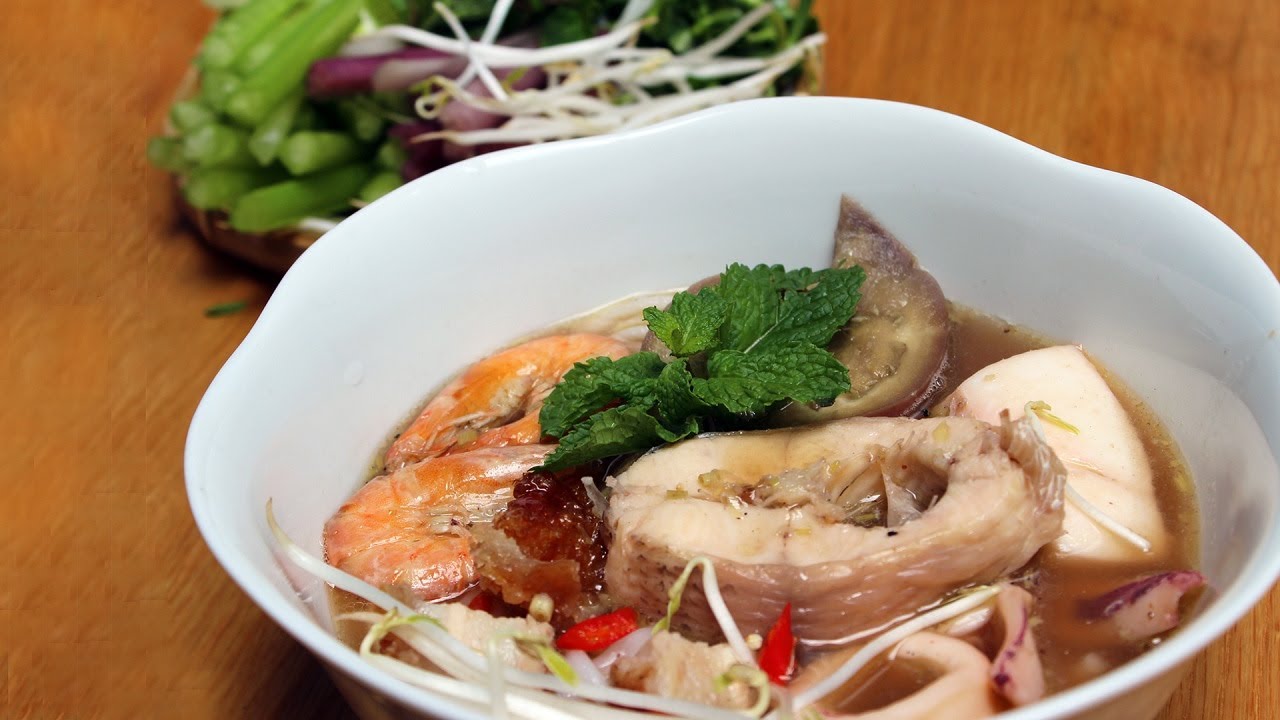 The dish has its origin in Hue, an old Vietnamese capital in central. It is favoured for the balance of spicy, sour and salty flavours. The broth is made to be full of beef bone flavour, and fragrant with lemongrass. The noodles put in the soup normally are rice vermicelli noodles, served with slices of beef, a hunk of either oxtail or pork knuckle, and a handful of green and sweet onions. You can add extra herbs, flash boiled veggies, and chillies. 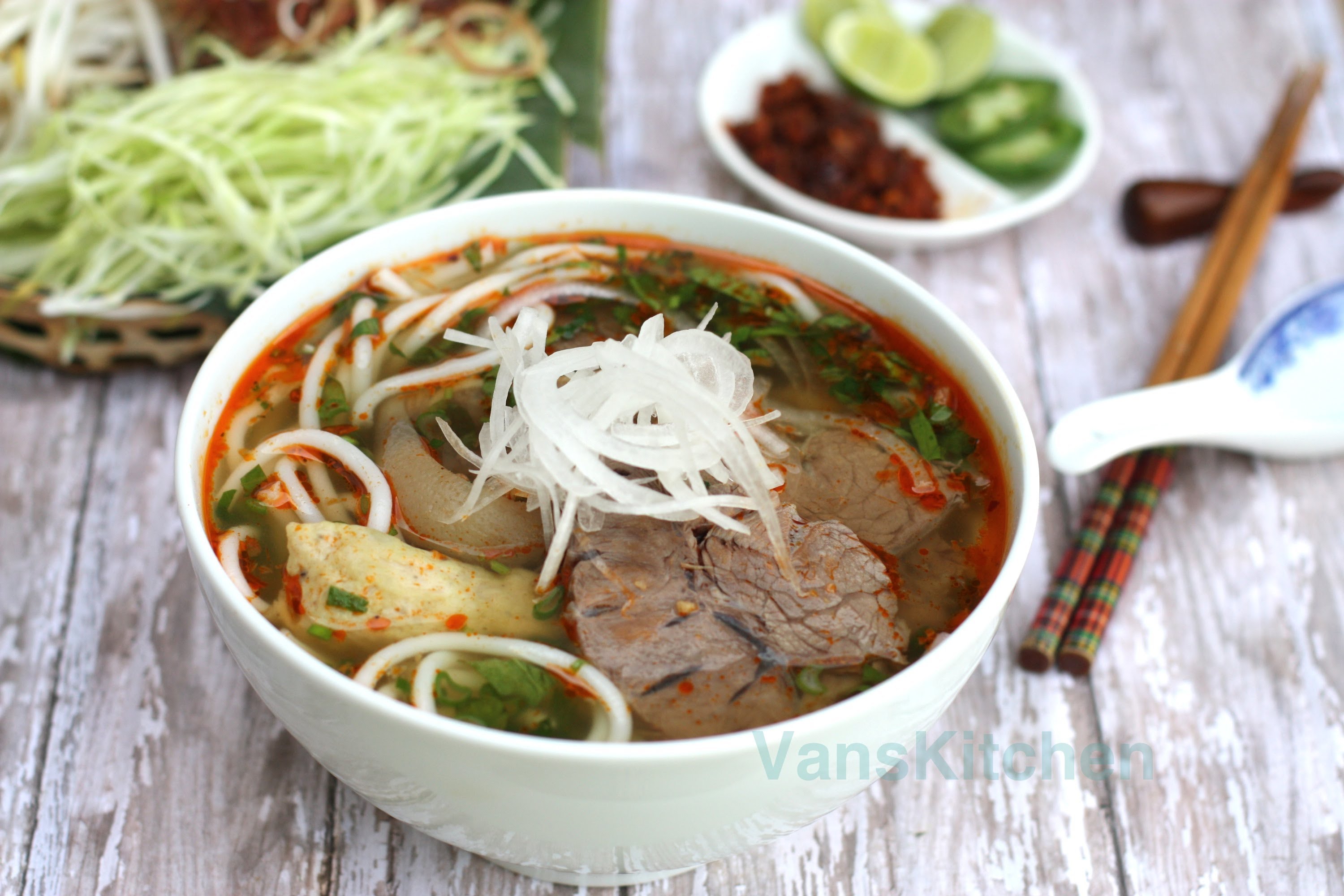 Bun moc is perhaps less popular than other dishes, particularly in Saigon since it originates in Northern Vietnam. The word “mọc” stands for the meatballs, according to Thanh Nien, its place of origin – “Mọc” Village in Ha Noi’s Thanh Xuan District. The bowl is typically served with a nice hunk of pork, some slices of Vietnamese sausage, topped with a handful of crispy deep-fried shallots. 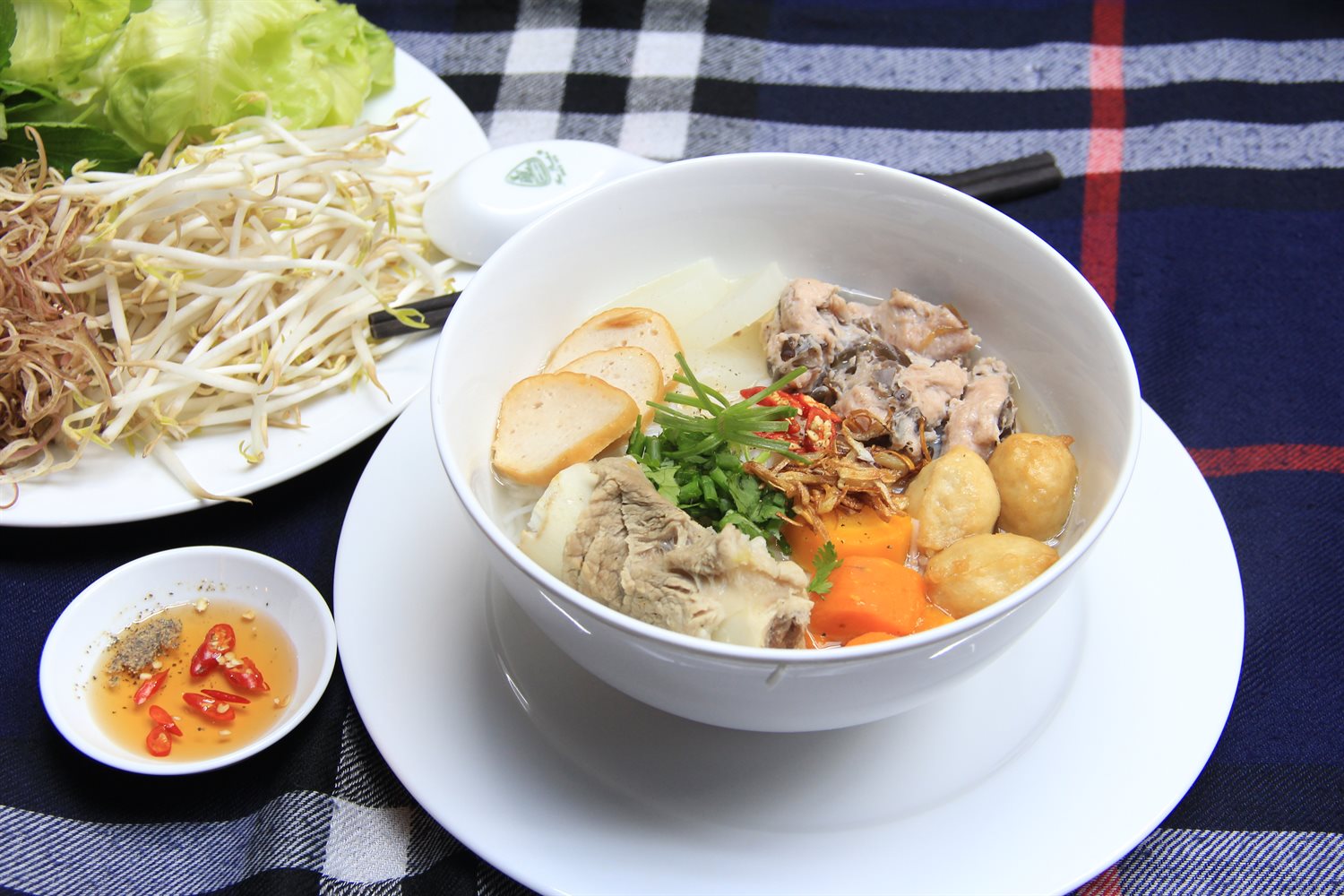 Hu Tieu Nam Vang is a cross-culture fusion food between Cambodian and Chinese, which contains slices of all sorts of organs, and a shrimp or few, plus an assortment of other additions. You can season with some chilli paste, loaded with chillies, and mixed with that huge fresh plate of herbs and vegetables delivering an authentic sense of Vietnam.

Otherwise, you can book a foody tour with us - Saigon Foody Tour - which offers you a unique Vietnamese food at every stop.